At my family’s cabin in the woods of Plain, Washington we have an amalgamation of things that people don’t really want anymore. Old lamps, way too many couches, and old books that have been read, but are still laying around. One of these books is a self-help book called Don’t Sweat The Small Stuff… And It’s All Small Stuff, by a guy named Richard Carlson.*

None of the books we had at the cabin hooked me the way Richard Carlson’s self-help book did. Maybe it was out of boredom–during down times at the cabin, when everyone was napping or knitting or secretly switching the music from Beethoven to Mozart, I would flip through his book and open it to random chapters, such as chapter 6, titled, “Remind Yourself That When You Die, Your ‘In Basket’ Won’t Be Empty,” or chapter 21, which is called, “Imagine Yourself At Your Own Funeral” or chapter 58, titled simply, “Relax.” 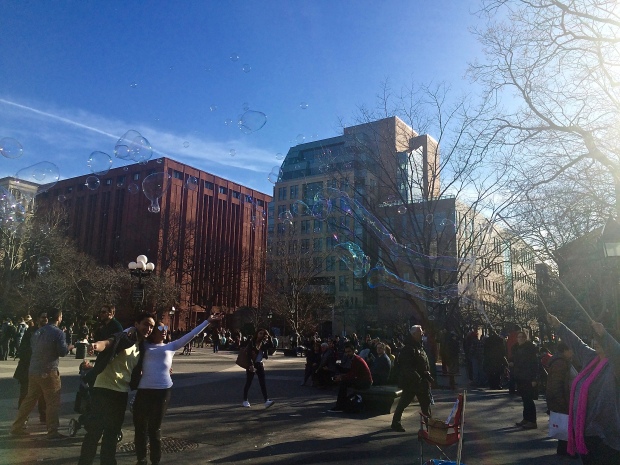 In my kid mind, Carlson was an amazing human being. He wrote about how he would wake up at 5 am every morning for “alone time” before his family would wake up. He would meditate, tell his wife he loved her every single day, and smile and wave at strangers.

At the time I was reading Carlson’s book (I can’t remember my exact age, maybe I was 10 or maybe 13?) I lived a very stress-free, happy life filled with loving family members and cats. But I also felt the need for constant self-improvement, and I wanted to be like Richard Carlson. I would sit and picture my future life as Richard Carlson–of waking up and meditating on my deck as the sun rose, kissing my wife on the cheek when she woke up and petting my golden lab named Daisy while making my kids a healthy breakfast, while the sun shone through my windows illuminating my beautiful, clean and minimalist house.

A peaceful sunset in a busy place.

Going into the records of my past journals (all of which I still have, since they provide a good laugh) I see a pattern of Carlson-inspired self-improvement action plans–lists that include things like getting up and going running before school (which I never did), cutting carbs from my diet (also never did), and being kinder to my sister (you’ll have to ask her about that).

I don’t want to say Richard Carlson’s books were wrong because he was actually quite famous and his theories probably helped a lot of people (also maybe I still harbor a weird admiration for him). But I did realize that for me, not “sweating the small stuff” is literally impossible. I’m always sweating the small stuff.

For example, while I’m writing this I am worrying about whether or not I should print out a document for my next class. This includes a circling line of questioning in my head that goes like: Do I really need the document? Are we going to get that far in class? Could I get away with not printing it? If I do print it, where should I go to print? Where is the closest printer on campus? What time do I need to leave this cafe in order to print and then get to class on time?

What would Richard Carlson do?

(Carlson would’ve printed the document out over the weekend. He would’ve also read the document, something which I have not yet done, despite the possibility of us discussing it in class.)**

What would Richard Carlson do?

I turned 21 last Monday, and I definitely felt more like a Bridget Jones than a Richard Carlson. But I also realized that everything Richard Carlson was trying to help me achieve, things like “happiness” and “inner peace” are quite arbitrary.

Not only that, but despite being unable to make lifestyle changes such as waking up early and running and eating salads, the major goals that I found written down in my old journals I actually did achieve. Like graduating high school, going to NYU and studying journalism in New York.

Looking back, I find it funny how my younger self was fixated on this book, and the idea that a few changes in my life could bring me closer to self-actualization. As a 21-year-old my life feels a bit like when you’re skiing too fast down a very steep slope and barely hanging onto your control. But I haven’t crashed yet, so where Richard Carlson would see room for improvement, I’m choosing to see a pretty good–if slightly shaky–skier.

*Disclaimer: I haven’t actually read Richard Carlson’s book since I was young. Therefore everything about it might be a figment of my imagination and memory (although I did look up the chapter titles).

**Update on the printing worries: I did end up printing the document for my class, but we didn’t end up discussing it.