Last weekend my cousin Andrew was in New York on tour with his choir (cool right? they got to sing at Carnegie Hall) so we met up on Saturday to do a bit of NYC exploring. We didn’t really plan anything because we’re relaxed like that, but the day turned out to be incredibly artsy. Now that I think about it, that seems to be such a recurring trait of New York: accidentally artsy.

Gotta love Picasso. (This is ‘Girl Before A Mirror’)

We started out at the MoMA because it houses Van Gogh’s Starry Night, and that just seemed like a good way to start the day. The best part about it was that while Andrew and I both have extreme appreciation for art, we were also able to look at something for a while, try to understand it, and then eventually shrug our shoulders and go “I’m never gonna get this one.” (This happens often at the MoMA, to be quite honest.) No pretending there.

I’m making it my life mission to see all of Monet’s Water Lillies in person.

While I was in Paris, my immersion in art felt so much more tangible because of the preserved architecture and monuments. I went to see Monet’s Water Lillies at the Musée de L’Orangerie so often I feel like the doorman knew me, I could go searching for Roman ruins on a sunny weekend, and the Louvre was empty on Friday nights except for my friends and I trying to do pirouettes.

In New York the art is less accessible. Or so I thought, until I looked back on my pictures from this Saturday and realized that I actually had taken more pictures of street art that Andrew and I had come across throughout the day then I did of art at the MoMA. 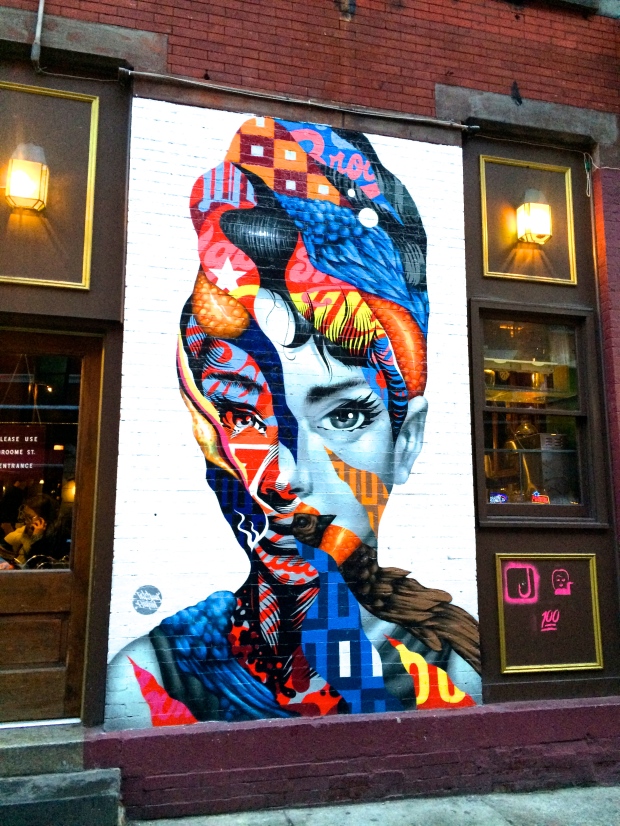 Is that you Audrey? Seen in Little Italy.

New York museums house some of the greatest art in the world–the Met alone could take days, weeks even, to fully explore. And even though I might still think the Louvre is better (it is) I have to admit that New York street art is amazing. And it’s everywhere.

The East Village Cafe where Andrew and I had lunch is so colorful, it’s quickly becoming my favorite cheer up place.

The sun broke through the clouds at the same time that we happened upon this guy.

Spending the day with a cool cousin while appreciating some cool art is definitely a win-win-win situation. And now my eyes are fully trained to look for art everywhere.