Amongst the crowds in the Piazza St. Marco, with the towering basilica and ornate Palazzo Ducale there is an aura of Disneyland magic. It’s the kind of magic that is purposeful and there only because the large crowds are catered to by gondola men in striped shirts, stores selling overpriced masks, and street musicians playing romantic melodies on the accordion.

Don’t get me wrong, I loved that magical feeling of Venice. Even if it was a tad exhausting, the city lived up to–and passed–my expectations of what I thought it would be like. From the second I stepped off the bus and onto the first bridge over the grand canal I was in love with the small sinking island, and felt a little bit like I was in a fairytale land. But in the early morning, when the air had a chill and the sun wasn’t quite high enough to be warm, on one of the small bridges in San Polo, I found a side to Venice that I loved even more. Take away the tourists and the sparkle, and you’re left with an actual city where people live and work and walk their dogs through the alleys and over the bridges at 9 in the morning.

One of my professors had mentioned before break that when traveling, it’s sometimes good to turn off your camera for a bit and sketch what you see instead. I had been meaning to for the entire Italy trip, but of course ended up putting it off until the last day. We got up early because our flight was that afternoon, grabbed a quick breakfast of cornettos and cappuccinos and then found a sunny spot to sit in and draw. The streets of San Polo were pretty empty that Tuesday morning, and as I began to attempt a sketch (I’m no artist, but I try my best) I noticed that the people around us were locals going about their morning routines.

(This is where I sat and drew, I would show the drawing but I’m too embarrassed.)

From my spot on the bridge I saw men unloading supplies from a boat, a couple on a morning walk, a man starting up his boat to leave for the day, and across the way a woman opening her window to hang out her laundry. I think in my head, Venice had been a destination, a place people went to see, but it hadn’t really occurred to me  to wonder what it was like to actually live there. All supplies have to be brought in on boats, the garbage has to be taken out on boats (they have cool garbage boats, actually, we got to see one in action), and in the morning hours as the island starts to wake up, you can see all the preparations for a day of impressing tourists like myself.

After we had sat in the quiet of that small neighborhood for about half an hour, we wandered on and came across a market by the Grand Canal selling all types of seafood, fresh fruits and vegetables, and dried fruits and spices. It was crowded, there was a band playing, people shouting, and the fake Disneyland magic had been replaced by the smell of fish, and it felt wonderful. We bought some strawberries to share and sat by the water snacking on them, enjoying the scenery and the sunshine. 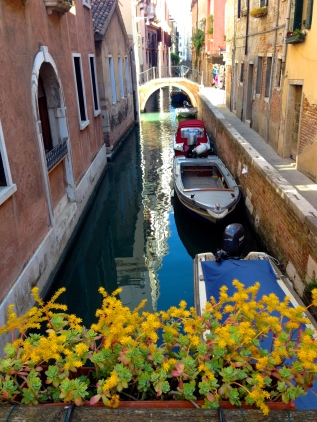