I had heard before leaving on my trip to Italy that Rome was fantastic and Florence was known to the Italians as “the city of Americans.” But despite the constant sound of American tourists (I am one myself so I can’t be too disparaging) with its quaint streets, beautiful surrounding scenery, and Tuscan heart, I found Florence to be more romantic than Paris in the springtime.

It’s a lot smaller than I expected it to be, so we went by foot, meandering our way through the narrow market streets. The city felt balmy and a tad muggy with the occasional five-minute rain storm, but because of the season it was in full bloom. The trees were green against the blue sky, purple wisteria crawled up orange walls, and cherry blossom petals littered the cobble stone roads.

There didn’t seem to be much to see when I first stepped off the train, especially since I had just been in Rome which is the holy mother of all sight-seeing cities, but after walking in the direction of the river the streets opened up to reveal the Duomo, sitting huge and decadent in the center of the square like an over-decorated wedding cake. A magnificent sight to behold, the Florence Cathedral soon became more than just a monument but a meeting place and a directional guide for us–“Well if we can get to the Duomo, we can figure out where we need to go from there,”–as we navigated the streets of the small city.   The best part is that each time we walked by the hulking cathedral, I couldn’t help but take about a million pictures. 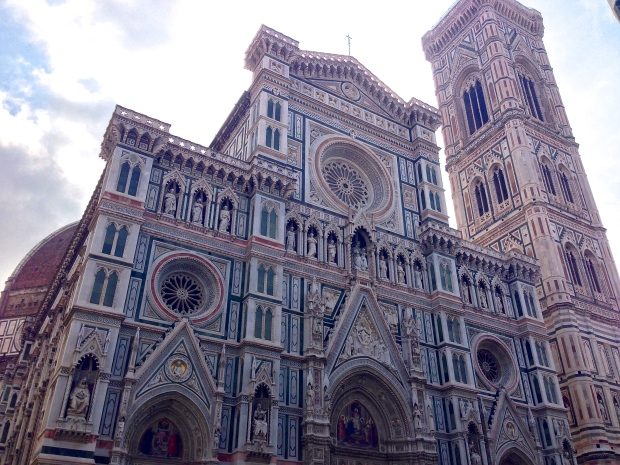 A lot of the sights of Florence are indoors because they are masterpieces of art (I got to see Michelangelo’s David, which might just be the highlight of my entire life) and it includes quite a bit of waiting in line, but the city makes up for it by having everything so close together. My favorite part about Florence was staying in a man’s attic apartment (he doesn’t live there, he just rents it out on Airbnb so no worries about stranger danger) because though it was incredibly tiny and the bathroom was weird, it had an amazing terrace with a view of the entire city.

In the evening we met up with friends who were there at the same time as us, had dinner, and then hung out on the terrace looking at the stars and the almost full moon. It was a wonderful way to relax in the midst of a busy trip, and gave me an idea of what it might be like to actually live in Florence.

Lots of laughter and pizza.

NYU actually has a campus in Florence, so who knows, maybe I will return again for a longer stay. For this time, however, it was about 24 hours and then that mazurka had to end and we were on the train to Venice!