Having Thanksgiving dinner in the Eiffel Tower was fantastic. All dressed up, we ate gourmet Thanksgiving-themed food while looking out at the sparkling lights of Paris and watching the boats go by on the Seine.

(Turkey stuffed with mascarpone, topped with foam. A side of scalloped potatoes, mashed sweet potatoes, and cranberry sauce. This was only the main course, the dessert was absolutely divine.)

Even with all the fanciness of dinner in the Eiffel Tower, it didn’t feel exactly like Thanksgiving. First off, we didn’t get to stuff ourselves to the point of food coma. But there was also a distinct lack of family that I felt, even with the distraction of being in the Eiffel Tower. It was, after all, my first ever Thanksgiving away from home.

In a way, however, my friends in Paris have made our own little family. All from different places, backgrounds, and cultures, we are displaced… perhaps even “global citizens.” But we are able to recreate the feeling of home that we miss just by getting together, making food, and playing games. 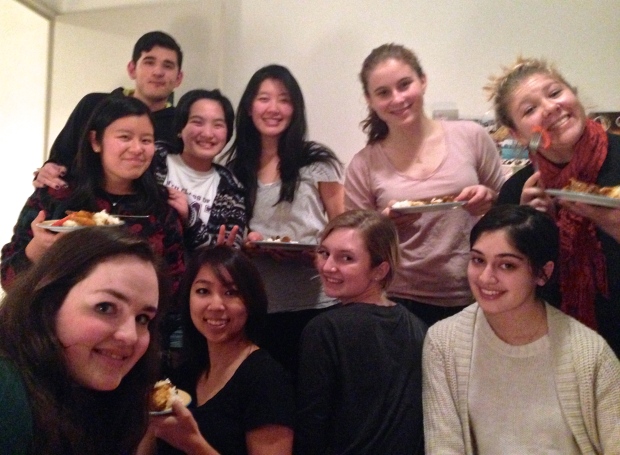 Our event last night was aptly named the “No Thanksgiving Leftovers Support Group.” Everyone contributed food, and using two kitchens we (well mostly Matthew, Dana, Julie, Jenna, and Judy… the rest of us chatted until it was ready) made a fantastic feast in order to celebrate both Hanukkah and Thanksgiving.

My friend Dana made a mountain of delicious latkes and brought her menorah so that we could light the three candles. She even said the blessing in Hebrew (which was super cool) and then kindly explained to those of us who didn’t know (me) what it meant. Having never had homemade latkes before, I am now a number 1 fan.

Matthew, our resident cook and bringer of awesome, made some delicious Indian Chicken Masala, with tomatoes covered in lime juice to go on the side. Basically way more flavor than has ever been in France before now.

We didn’t have the elegant view of the Seine and the food may not have been as delicately arranged as on Thursday, but we still had an excellent time cooking and eating in each others company.

I realized that for me, Thanksgiving isn’t really about the food at all, but is more about the company and the act of being together. In the past I might have groaned about being dragged to an all day family event (please no one take offense but those parties are loonngg), but now I know how much I actually love it.

In fact, my favorite part about the fancy meal in the Eiffel Tower was not the food, or the view, or the wine, or anything like that. It was when my friend Hannah and I compared our family Thanksgiving traditions, talking about all the funny things that happen each year and what makes it special.

After eating our heart’s content of chicken masala and latkes, we all cleaned and then played games until the wee hours of the morning. There was some intense slap jack rounds, some hilarious impersonations, a game of Cards Against Humanity, and most of all, a ton of laughing.

I am incredibly thankful for Paris and the friends I have made here.

Happy Thanksgiving and Hanukkah everyone!