“You are now in a process.”

The Cadman Congregational Church, a 1920s building located in the Clinton Hill part of Brooklyn, has that old building smell — like dust and bit of mold — and stairs that creak as you walk up them. But past the pile of shoes at the entrance, the gymnasium of the old church has been completely transformed into a light, airy dance studio complete with a brand new sprung dance floor and freshly painted white walls. 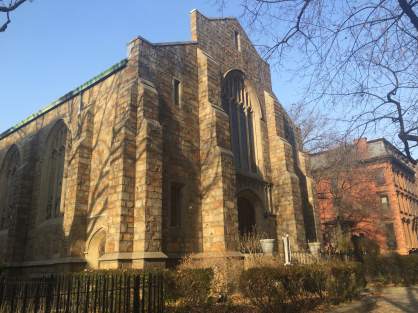 There’s no central heating, but a pile of blankets are left for people to wrap up in, and a group of dancers, puppeteers, actors, church members, and community members enter happily sock-footed, greeted by Pepper Fajans, who is a dancer, puppeteer, carpenter, and creator of the Brooklyn Studios for Dance.

“You are now in a process,” said Fajans, standing barefoot in the center of the cavernous church gymnasium-turned dance studio.

Dressed in a simple white t-shirt and tan carpenter pants, Fajans welcomed the audience to Co. Venture in Process, a preview of his show Co. Venture, which is a work of modern dance, puppetry, and storytelling done in partnership with 91-year-old dance archivist David Vaughan. Originally performed at the 2015 Montreal Fringe Festival, Fajans and Vaughan are revisiting the work to perform again this January at the Centaur Theater in Montreal.

After explaining that the giant wooden boards on either side of the room were representing the wings of a theater, Fajans slid a board slowly across the room, then let it fall forward silently to reveal Vaughan sitting in a chair. He began reading while Fajans danced, slowly balancing a board in the air.

At Brooklyn Studios for Dance, dance is much more than movement or technique, instead taking artistic collaboration and the involvement of the community to create a sustainable place where people can dance together.

Since opening in May, Brooklyn Studio for Dance’s main mission has been to educate, perform, and practice the art of dance, but Fajans says that his purpose right now is also to work in partnership with the church in order to secure the longevity of the space. This means investing in the building and the local area of Clinton Hill.

Though Fajans is not religious, his relationship with the church is one of a symbiotic nature. He is the janitor and sexton at Cadman Congregational and he uses his carpentry skills on the continual project of fixing up the building.

“Dance is my practice, call it spiritual, call it practical,” he said. “Members of the congregation take our classes, they advise us on how to relate to this local community, and they give us a great example of how trust and faith and love can be put into practice.”

The building’s fix-up is an ongoing task. Members of Brooklyn Studios for Dance work once or twice a week in the church’s garden, volunteers put up storm windows a few weeks ago, and the heating problem still remains to be solved. Just like Fajans’ dance, it’s all a process.

“It’s a totally old church space and now it totally looks new. And I feel sometimes it looks like a museum,” said Maiko Kikuchi, a puppeteer and artist who performed with Fajans and Vaughan in Co. Venture in Process. “It’s a really beautiful space and I really love to work here.”

What makes Brooklyn Studios for Dance special is that it isn’t just a bunch of dancers using a church for rehearsal, but an investment in the community. This can be as simple as Fajans using the local cafe for wifi and snacks, or as involved as hosting a swing dance social every Friday night for community and church members to meet dancers and get moving.

“The atmosphere is electric.”

At the end of their first season as a studio, Brooklyn Studios for Dance held a final performance and Christmas tree lighting ceremony with members of the Cadman Congregational Church.

I spoke to some members of the church and of Brooklyn Studios for Dance about what it’s like to share the space and and come together for events like the Christmas tree lighting:

“What am I going to make art about, really?”

Dancers in New York nowadays often use the Internet for their community space, fundraising on crowdsourcing sites and advertising their shows on Facebook. Brooklyn Studios for Dance has a website and a Facebook page, but Fajans emphasizes the importance of having a space for gathering. This allows dancers to get involved in the community they’re located at, and it gives them a place for artistic collaboration. Like in Fajans’ show Co. Venture, the dance created and showcased at Brooklyn Studios for Dance is often not just dance, but works that include multiple elements such as acting, live music, storytelling, conversations. 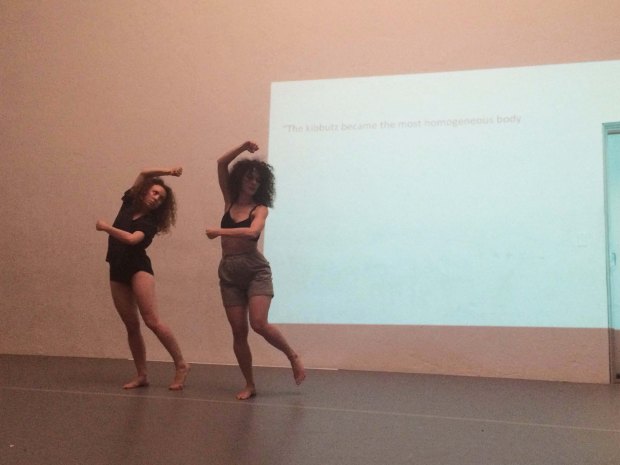 A dance choreographed by Hadar Ahuvia, performed at Brooklyn Studios for Dance.

In Co. Venture, even though Vaughan sits in a chair throughout the performance, he and Fajans move together, breathe together, and have a conversation — sometimes through actual speaking, other times through movements, or even just eye contact. Their connectedness shows the power of creating art in a team.

“What am I going to make art about, really? Am I just going to wake up one day and decide that I’m going to paint a painting? It’s not quite like that,” said Fajans. “I’m very interested in being inspired by others, in seeing the delight in others and seeing the fear in others.”

The audience was part of the collaboration as well, part of the “process” as Fajans called it. None of the audience members left immediately after the show, instead sticking around to drink wine donated by a local wine shop and talk to Fajans and Vaughan.

“It’s hard not to cry when I see it,” said Nick Lehane, who was seeing Co. Venture for the second time. “It’s incorporating elements that they’re both interested in. I guess that’s what good collaboration is.”

Collaboration could be the trick to keeping dance alive in a time when money to fund large companies simply does not exist any longer. Fajans and Vaughan met while working for the Merce Cunningham company, and they both witnessed it being shut down. Being a dancer in New York and Brooklyn is a constant struggle to find money, space and an audience — making dancers constantly question their own worth.

“Maybe a dancer is worth nothing, but maybe the collaborator is worth something,” said Fajans. “Dance is your practice and your skill set, but it’s in collaboration that it starts to create value.”