Well I haven’t blogged in ages which goes to show that new year’s resolutions are useless. BUT: It is now spring break which means I have all the time in the world and I have taken on a challenge.

At first, I was going to do a different craft each day and blog about it, but like usual I set my bar way too high and am now bringing it down.

I first experienced these lovely little desserts last summer in Paris, when my friends and I went crazy over them in a little shop in Montmartre and ever since then I have been wanting to try to make some of my own.

After a little internet purusing, I found a pretty good recipe here and ignored all of the warnings about how incredibly difficult it is to make macarons.

It was going pretty well until I added the almond flour/ powdered sugar mixture which made the batter incredibly lumpy because I hadn’t put the dry ingredients through the food processor.

It got worse when I realized that one needs a pastry bag to put the macarons on the baking sheet. Using a spoon worked, but it was not nearly as neat. 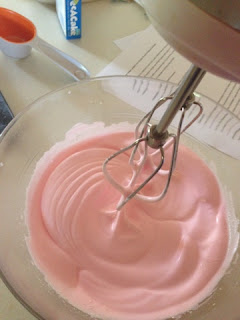 After they came out of the oven, I had some hope that they might have turned out alright. I made strawberry buttercream (they didn’t have any rose syrup at the store so I went with strawbery flavoring instead).

Until I bit into one with a loud crunch. (For those of you who have not had macarons before, they are NOT supposed to be cruchy!)

I had overbaked them.

Not only had I overbaked them but they looked absolutely ridiculous because of my lack of pastry bags.

They didn’t have the little ruffle on the bottom and many of the tops had cracks, as well as the lumps from my lumpy flour mixture.

I think I can only improve from here.

After today’s macaron disaster I have decided to spend all of my time this week perfecting my macarons making skills. Starting tomorrow I will:

1. Figure out how to work the food processor.
2. Buy pastry bags with the right type of nozzle. (Maybe they have them at a craft supply store like JoAnn’s?)
3. Sift the flower properly.
4. Watch the baking time!

Will keep you updated